Butters’ first adventure in wonderland was getting to know her new family.

There was, of course, the black-haired lady, who called herself mommy. 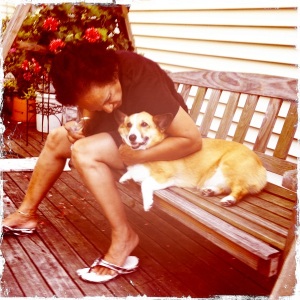 There was grandma, whose house Butters visited so often that it was often referred to as “Butters’ country home.” Grandma was a great snuggler, too, and gave Butters lots of love and affection.  Butters would also stay with grandma sometimes when mommy went on vacation.

Butters’ grandpa lived far away from wonderland, in a place called California, but he visited often.  Although she was afraid of him at first, grandpa gave Butters lots of treats, belly rubs and love, and Butters soon grew to love him, too. 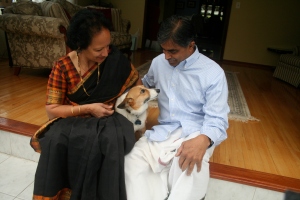 Butters with her grandma and grandpa on a formal occasion

Butters soon discovered that Aunt Priya was a championship napper, and she often plopped herself atop her to take a nap as well. Butters loved napping, and so did her whole family.  Aunt Priya also liked to pick Butters up, “like a barrel,” she would say. 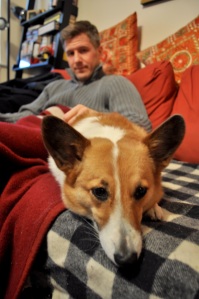 And of course, there was Uncle Geoff — Butters met him on her first day in wonderland and loved him immediately.  She could tell right away that he was warm, kind and generous.  Over the days, weeks and months, she came to learn that he would give her lots of treats and the best belly rubs in the world.

And so, Butters basked in the love and attention she received from her new family. 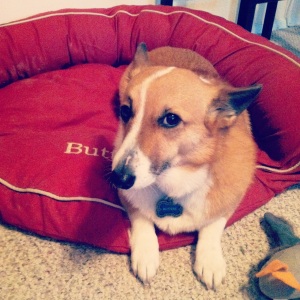 This is the story of a Welsh Pembroke Corgi named Butters.  The beginning of her story has been strung together in bits and pieces, but it seems to go something like this: Butters was born to a breeder in the country and was soon thereafter promised to a young family.  She got off to a rough start when her brother Peanut bit her nose — she bears the scar to this day!  She was happy to go home with the family, where she thought she would run, play and snuggle for the rest of her days.  All was well, but something seemed to be missing.  Then, suddenly, her family went away.  Butters was bewildered — had she done something wrong?  Why had the family abandoned her?  Butters moved to the city with a nice young man.  The young man was very kind, but something still seemed to be missing.  He was very busy with work and when he wasn’t working, he wanted to go out and play late at night in the big city … without Butters.

Then, one winter day, Butters got a visitor.  A lady with black hair came to the city and took Butters for a walk out in the newly fallen snow — her favorite!  After their walk, the lady packed up Butters and all her things, put her in a car and started to drive.  And drive and drive and drive.  When she finally got out of the car, Butters looked around.  She had no idea where she was, but by day’s end she knew one thing for certain: she was home!  And the black-haired lady was the person she had been missing all along.  She was in wonderland, and her adventures could finally begin ….